A DNS server for ZeroTier users 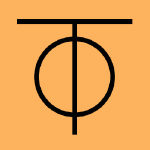 This Quickstart was written using two machines - one Ubuntu virtual machine on Digital Ocean, and one OSX laptop on a residential ISP. To follow along step by step, you'll need to provision equivalent infrastructure. If you use different platforms, you should be able to figure out what to do with minimal effort.

You may do this manually through the ZeroTier Central WebUI, 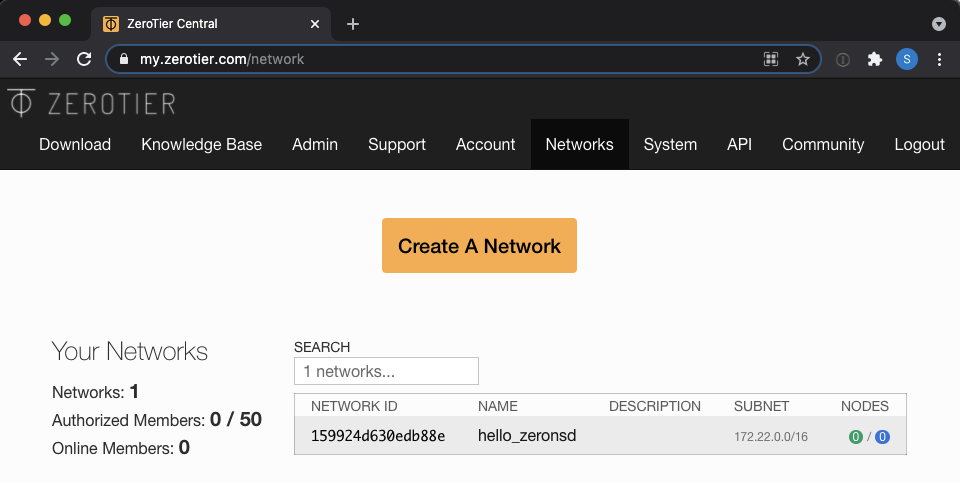 ZeroTier must be installed and joined to the network you intend to provide DNS service to. The following should work from the CLI on most platforms. Windows users may download the MSI from the ZeroTier Downloads page. For the remainder of this document, please replace the example network af78bf94364e2035 with a network ID your own.

Authorize the node to the network by clicking the "Auth" button in the Members section in the ZeroTier Central WebUI. 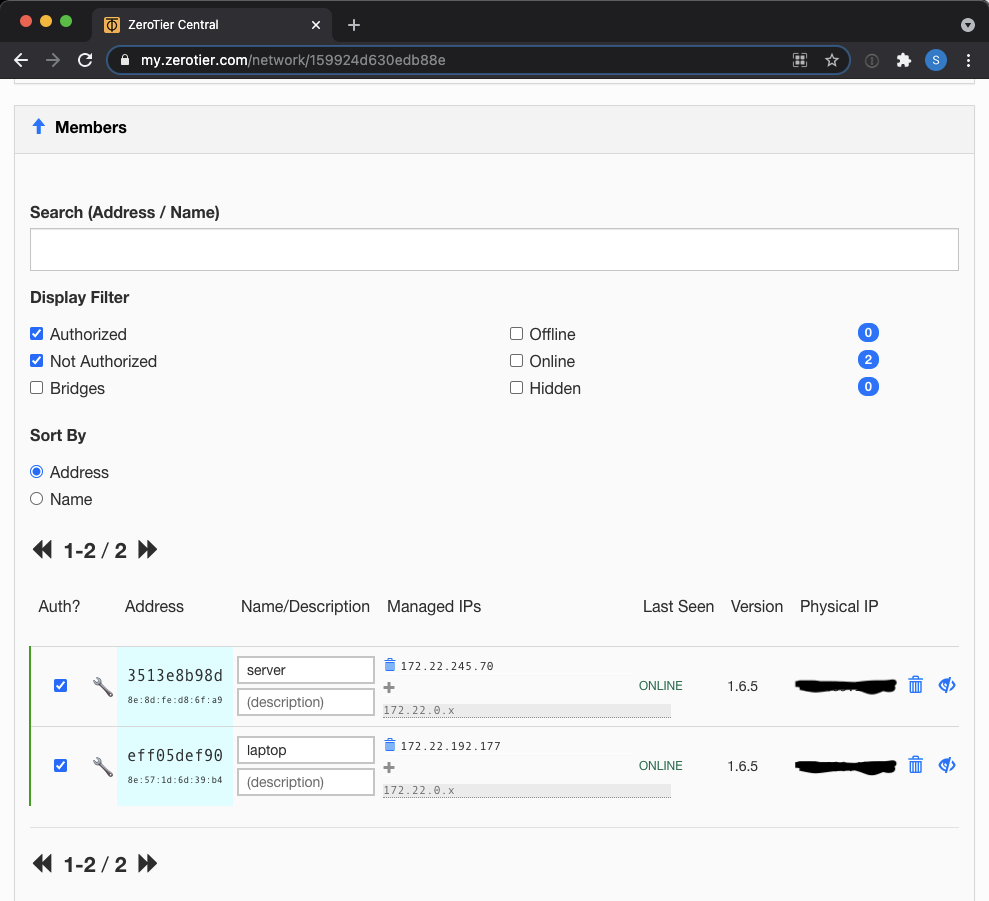 Before we begin, we will need to log into my.zerotier.com and create an API token under the Account section. ZeroNSD will use this token to read Network members so it can generate records, as well as update DNS settings.

You will need to stash this in a file for ZeroNSD to read.

Finally, restart all the ZeroTier services.

ZeroNSD should only run on one node per network. Latency for DNS really matters, so try to place it as close to the clients as possible.

The latest release is not reflected below. Go to the link above to get a link!

If we don't have packages for your platform, you can still install it with cargo.

For each network you want to serve DNS to, do the following (replace af78bf94364e2035 with your network ID)

You should be able to ping the laptop via it's DNS name (or any preceding subdomain, since we've set the wildcard flag)

In order to change the settings (such as the TLD), do the following (replace af78bf94364e2035 with your network ID)

Most Linux distributions, by default, do not have per-interface DNS resolution out of the box. To test DNS queries against ZeroNSD without zerotier-systemd-manager, find the IP address that ZeroNSD has bound itself to, and run queries against it explicitly.

Query the DNS server directly with the dig command

The Ubuntu machine can be queried with:

The OSX laptop can be queried with:

Add a line to /etc/hosts and query again.

Query a domain on the public DNS to verify fall through

To check out the system resolver settings, use: scutil --dns.

The Ubuntu machine can be queried with

The OSX machine be queried with

Are you a Windows user?
Does this work out of the box?
Does nslookup behave properly?
Let us know... feedback and pull requests welcome =)

NOTE this portion of the document is largely intended for advanced users who want to get more out of zeronsd's service.

zeronsd will also serve non-zerotier records in two situations: It will forward /etc/resolv.conf's nameservers on a TLD mismatch. This behavior is similar to dnsmasq, a popular DNS server on Linux.

Additionally, to serve custom records you can supply the -f flag with a file in hosts format it will service records from that file under the provided TLD, merged in with the zerotier nodes. Example below.

NOTE: if you followed the steps above, you will want to systemctl stop zeronsd-<network id>, and zeronsd unsupervise <network id> your network, before continuing.

Make a file called hosts and put this in it:

Then, let's start a temporary server for now. We'll just use the start subcommand of zeronsd. This will run in the foreground, so start a new terminal or & it.